For immediate release — North Saanich, BC — The 44th running of the Harriers Pioneer 8K kicked off the 41st annual Vancouver Island Race Series as well as the BC Super Series on Sunday. Participants enjoyed near-perfect race conditions. The race is also the provincial 8K championships.

Wodak won for the ninth time in 10 attempts at the Pioneer 8K. The one time she did not win, she finished second.  Sunday, Wodak, took the lead at mid-way and finished strong in the time of 26:20 to set a new masters (plus-40) age-group event record. She currently holds the course record of 25:55 and the event record of 25:28, which is an all-time Canadian best time for the distance.

Wodak currently holds the national marathon record from Sept. 2022 where she clocked a 2:23:12 performance in Berlin. The two-time Olympian said, “It was a great day at the Pioneer 8k. The rain didn’t dampen anyone’s spirits — everyone was racing hard and having fun! It was great to be a part of my favourite 8k again.“

Wodak next races the Houston Half Marathon, where she once held the national record of 69:41. On Sunday, Jan. 15, she may attempt to take back the record which now sits at 69:38.

Finishing in second place was fellow Olympian Genevieve Lalonde who clocked a 26:35. Lalonde holds the national 3000m steeplechase record at 9:22.40. Taking third was Kate Ayers with her finishing time of 27:24. The performance represents a new personal best for the Victoria-based runner. She previously ran 27:54 in the same race two years prior.

Thomas Nobbs, a former University of British Columbia Thunderbird was taking his first run at the 8K distance. He came into the race with a 10,000m best of 29:31.68. Sunday, he clocked 24:01 for the win.

“It was such a blast getting to witness the energy of the Vancouver Island running community while briefly coming up for air in a big training block,” shared Nobbs. “I wanted to race this a little smarter with even splits all the way through the race and just rode the atmosphere of the other racers cheering me on during the second half. Was much more fun to run on my own effort and see who may or may not be there at halfway into race.”

Finishing second was Jaxon Kuchar who clocked a 24:27 finish time. Gabe Van Hezewijk took third in the time of 24:57. Both athletes compete for the University of Victoria Vikes.

The top junior U20 runners were Kuchar and Ella Ballard with her 28:48 clocking. She took ninth in the women’s field.

Roslyn Smith who was competing in the 75-79 age category was the fastest age-graded runner on the day at 96%, one percent faster than Wodak.

Olivia Lundman from Lanztville, BC, a national-level race walker, finished second in her 20-24 age group while walking. She clocked a 37:45 finish time.

There were 619 finishers, which is the most in nine years and the 11th most in the event’s 44-year history.

The next race in the eight-race series is the Cobble Hill 10K happening Sunday, Jan. 22. Information about the series is available at www.islandseries.org.

The 43rd running of the Prairie Inn Harriers Pioneer 8K will act as the BC provincial championships happening on Sunday, January 8, 2023, in North Saanich.

The race is the first road race of the year in Canada. The Pioneer 8K is also the first race of the Vancouver Island Race Series as well as the BC Super Series.

The course is gently rolling and is considered fast. The surface is asphalt and is run on quiet residential roads starting and finishing at the Tourist Information Centre off the Pat Bay Highway (17) in North Saanich.

Event records are 22:58 by Carey Nelson from his 1986 running on a previous route named the Brentwood Bay 8K in 1986. The women’s record is 25:28 by Natasha Wodak on the Central Saanich route in 2013. Both athletes are from Vancouver and both are two-time Olympians.

The current course records are 25:55 by Wodak from the 2020 running of the event. Tristan Woodfine, one of Canada’s top marathon runners, set the new course record in 2022 at 23:10, just 12 seconds off of Nelson’s 36-year-old event record.

Wodak, who may return for the 2023 edition, her tenth, is the current national record holder in the marathon at 2:23:12. She broke Malindi Elmore’s record in Berlin this past September. Wodak is the former 10,000m and half-marathon national record holder. Her 25:28 performance is the fastest road 8K in Canada, all-time, however, official records are not kept for the distance.

Wodak won the race eight of the nine times she has competed. In the one year that she did not win, she finished second.

Like the Pioneer 8K, the Vancouver Island Race Series is entering its 43rd year. There are a total of eight races taking place in North Saanich, Sidney, Colwood, Sooke, Cobble Hill, Nanaimo, Port Alberni, and Courtenay.

Runners of all abilities may enter single races or purchase a season pass for just $175. 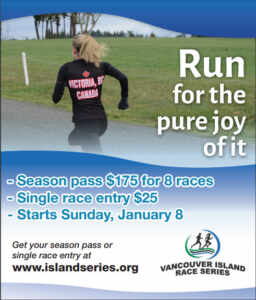