In addition, VIRA will facilitate the creation of individual races in the series that:

Encourage participation by athletes of all abilities

Are rewarding for all participants; and

Are accurate and challenging.

VIRA will provide leadership to its membership on matters that affect running on Vancouver Island as per the explicit wishes of the membership.

Membership is open to clubs and events and provides benefits such as event insurance and promotion of member events on the website and through social media.

For information on membership and for a list of current members go to:
VIRA Member Clubs page.

In 2018 VIRA adopted a new constitution in keeping with the new Societies Act. Read the VIRA Constitution and Bylaws.

How it all came to be…

In 2023, runners will be celebrating 42 years of the series. The series features eight races, run approximately every two weeks from January to April, with distances ranging from 5-kilometres to the 21.1K half marathon. The series kicks off on the second Sunday in January with the Harriers Pioneer 8K. This is followed by the Cobble Hill 10K, Cedar 12K in Nanaimo, Hatley Castle 8K in Colwood, Port Alberni Paper Chase 15K, Comox Valley RV Half Marathon, and Synergy Health Management Ltd Bazan Bay 5K in Sidney. The series has a very strong following amongst Island and Vancouver’s Lower Mainland runners, attracting all levels from beginners to Olympic -level elites.

The concept behind the series is that runners accumulate points in each race, and the final standings (overall and for age category prizes) are the average of the best four results, with at least one race being over 10K in length. Running clubs can also accumulate points in a bid to win the overall series. 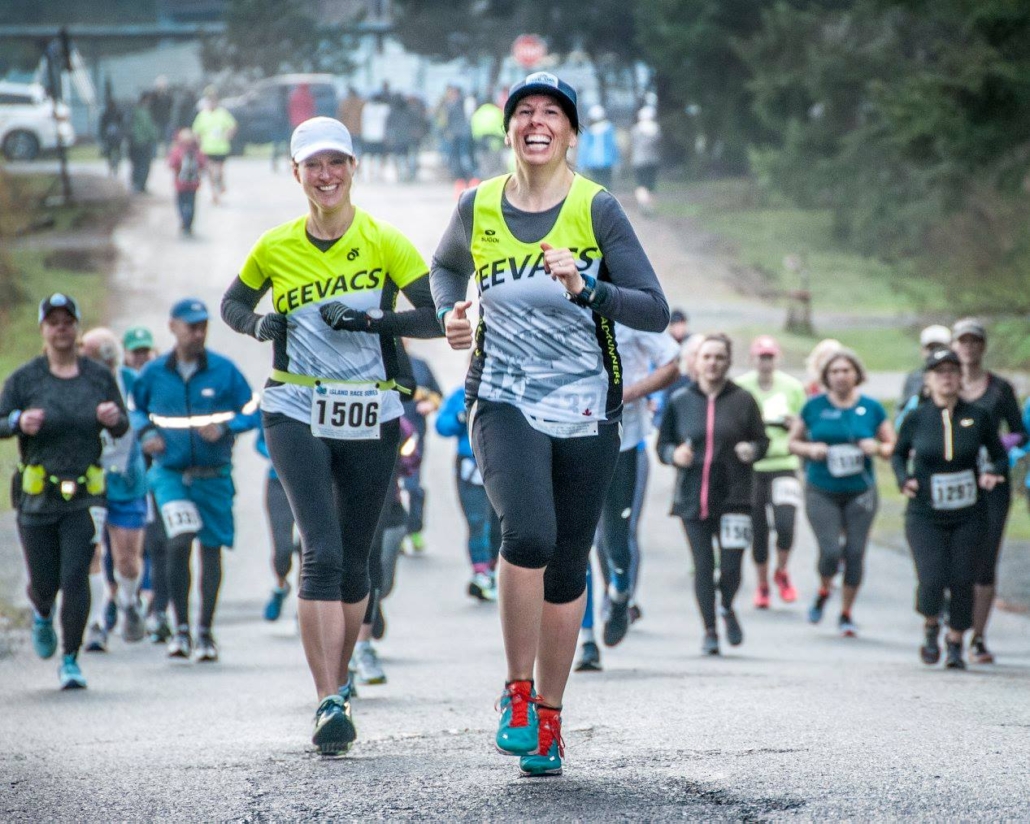 Founded by John Crouch, President of the Vancouver Island Runners’ Association (VIRA), the series was patterned after the Lower Mainland Grand Prix Series of five races. The Pioneer 8K was part of that series until the Island Series was born in 1982. Since its inception over 110,000 runners have participated in the series, which has varied between six and 10 races. In 1982 there were 1,358 runners and over the years the numbers have grown. “The five glory years for participation were from 2003 to 2007, when for four of those years it consisted of nine races,” explains Bob Reid, Past President of VIRA. From 2007 – 2015 it was an eight-race series. Merville dropped out for 2016 making it seven races. In 2017, the series is back up to eight races with the addition of Port Alberni.

According to Reid, the series’ popularity is due to the age divisions: “With five-year age categories, you can challenge yourself against your peers, which makes for a friendly rivalry.” The club connection is also important. “The club scene here all spawned out of training clinics and recreation centres, where individuals would train for a specific event and then afterward, continue running. Clubs join the series and as their club grows so do their points tally.”

The Island Series sees returning runners and new runners of all ages. John Woodall, at 83, had run the series for 12 years. “I like the socializing and seeing the same people every year. They are all my type of person, with the same ideas and who enjoy running.” Maurice Tarrant now 91 completed over 150 Island Series races over the past 30 years and has finished in first place in his age category an incredible 300 consecutive times, including all of his other races on Vancouver Island. Bruce Hawkes at age 78, celebrated his 224th Island Series race in 2022.

Newer runners like Benjamin Thompson and Jennifer Mickelson found the series great motivation to run through the winter months. “Doing competitive races consistently every two weeks gave me the chance to really push myself and see what my body was capable of,” says Thompson. “I really enjoyed running the different distances with the same core group of people. By the middle of the series, I was recognizing faces of people that were at a similar pace,” adds Mickelson.

With an active board representing running groups from Sooke to Campbell River, the series has strong volunteer and community support. This allows the series to develop, and with new sponsors bringing quality prizing for the participants, the races are attracting new runners.

Originally published in 2013 for Canadian Running Magazine – information has been updated for 2017 and 2023.

A great experience that will have you returning for more

What the series offers you

Carefully and skillfully measured courses that are accurate.

Each race is managed by a run club in partnership with the Vancouver Island Runners’ Association and it many decades of race management experience.

There are many opportunities to be rewarded for your hard-raced efforts. Stick around after each race you may just win an award or draw prize

Team racing for all abilities. Register as a team member for your company team, gym, track & field club, sponsor or sports team

Measure yourself against your own performances. Check your results and find a number rating your performance